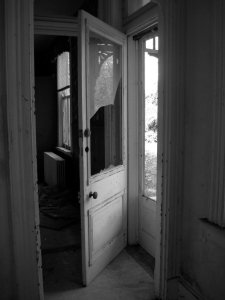 The youth sent by his father to steal (noisily) breaks the door with his feet.

Here, when some people wrangle, the common lines that you’ll hear as an observer are: “Do you know who I am?”; “You sabi who I be?”* In a sense, these words can be a threat.

Last Saturday, my friend (Bolaji) and I were on our way to Port-Harcourt from Delta State. While traffic had just started to ease on Isselukwu, we wanted join the other vehicles heading toward Coker junction when we were hit from behind. Furious, Bolaji  left the car with its engine running at idle.

The driver, who had just hit us, did same and the two immediately squared off in front of each other like boxers prior to a fight. Sensing trouble, I quickly got out of the car and tried to get both men to settle the issue amicably. Neither of them was willing to back down, instead they began exchanging words. I tried to concentrate all my energy on Bolaji. It didn’t work, rather he said to me, “Guy, commot road, this idiot don jam trouble!”*

The driver spat almost immediately too: “Do you know who I am? Do you know I can lock you up?”

People gathered and it didn’t long before the scene caused another hold up. I watched the driver make a set of calls; all I supposed were to his friend(s) at the police or FRSC (Federal Road Safety Corps).

And I was right.

The dude was calling the officer-in-charge of FRSC, Warri Chapter. Bolaji later confirmed this to me and added, “I called his Superintendent who ordered him and his boys to carry out a proper investigation and report back him.”

A proper investigation was conducted and in the end, the driver was faulted and asked to pay for the damages.

He who is backed by a superpower has nothing to fear. Such a person can do anything without thinking about the consequences of his action. If he has a leaning toward evil, his victim(s) will suffer so much and may not get the required justice in this life.

(*) The dialogue is expressed in pidgin English. It’s an artificial language used in Nigeria. “Sabi” means “Know” and “Commot” means “Leave/Remove/Get out.”

41 thoughts on “One Week, One Proverb”